by James S. A. Corey 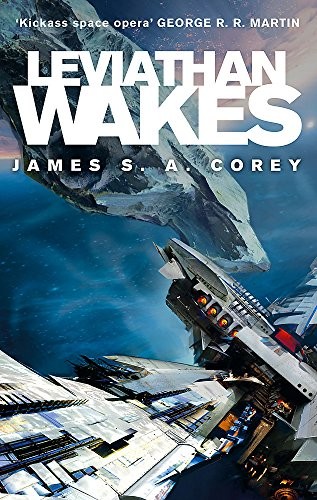 Leviathan Wakes is a science fiction novel by James S. A. Corey, the pen name of Daniel Abraham and Ty Franck. It is the first book in the Expanse series, followed by Caliban's War (2012), Abaddon's Gate (2013) and six other novels. Leviathan Wakes was nominated for the 2012 Hugo Award for Best Novel and the 2012 Locus Award for Best Science Fiction Novel. The novel was adapted for television in 2015 as the first season-and-a-half of The Expanse by Syfy. Five short stories that take place before, during, or after Leviathan Wakes were published between 2011 and 2019.

A fast fun romp around the Solar System that manages to combine pirates, intrastellar war, humour and the potential end of humanity without missing a beat.

It's far from "hard science", but it's not any more hand wavy than it needs to be to keep the plot moving. There were a few spots you don't want to think about too much, but nothing requiring you to hold your nose.

The ending was weak, and leaves you wanting more, but that's to be expected with the first book of a new series I suppose.

The characters are interesting, the backdrops have some depth, and even as it moves along well it's not all fluff - there are elements that make you stop and think.