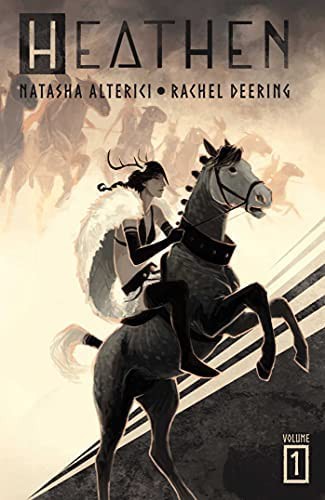 Exiled from her village for kissing another woman, viking warrior, Aydis, sets out to destroy the god-king Odin, and end his oppressive reign. Along the way she is joined by mermaids, immortals, Valkyries, and the talking horse, Saga.

Aydis is a viking, a warrior, an outcast, and a self-proclaimed heathen. Aydis is friend to the talking horse Saga, rescuer of the immortal Valkyrie Brynhild, and battler of demons and fantastic monsters. Aydis is a woman. Born into a time of warfare, suffering, and subjugation of women, she is on a mission to end the oppressive reign of the god-king Odin.

Collects issues #1 to #4 of the twelve issue series.