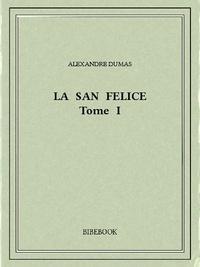 La Sanfelice (or La San Felice) is an 1864 novel by the French writer Alexandre Dumas. It depicts the arrest and execution in Naples of Luisa Sanfelice, who was accused of conspiring with the French and their supporters against Ferdinand I of the Two Sicilies during the French Revolutionary War. Lord Nelson and Lady Hamilton, who were in Naples at the time, also feature as characters.