A country of vast designs

James K. Polk and the conquest of the American continent 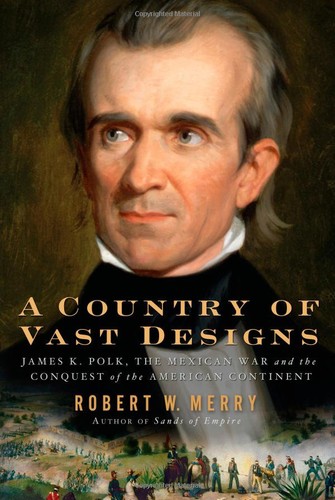 In a one-term presidency, Polk completed the story of America's Manifest Destiny -- extending its territory across the continent, from sea to sea, by threatening England and manufacturing a controversial and unpopular two-year war with Mexico that Abraham Lincoln, in Congress at the time, opposed as preemptive. Robert Merry tells this story through powerful debates and towering figures. - Jacket flap.

A decent view of Polk's four years in office, primarily dealing with Texas and the Mexican-American war. But it's told almost entirely from a Washington insider perspective (the author is a WSJ journalist), based on Washington partisan newspapers, Polk's diary, and letters with the President. It's about twice as long as it needs to be for this, and often devolves into pages talking about bickering between two senators or Polk and Buchanan - mildly interesting and similar to today, but not what I was looking for.