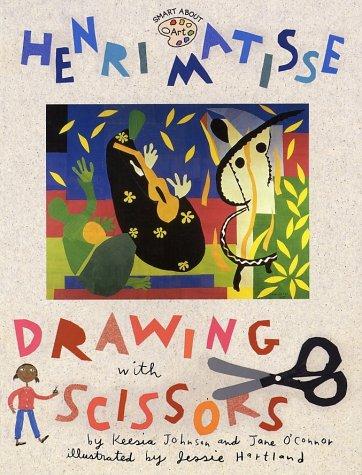 Keesia and Henri Matisse have the same birthday—New Year’s Eve! That’s why she picks him for her artist report. She finds out that over his long career Matisse made paintings, sculpture, books, costumes, and her favorite—his cut-outs, or what Matisse called “drawing with scissors.” The report is filled with about 20 of Matisse’s masterpieces as well as artwork that Keesia has created in his “style” (cut-out leaves, drawings through windows, fauvist animals). As she follows Matisse through his life she discovers why he is considered one of the greatest artists of the twentieth century.

Fictional stories in picture books about artists are... oddly common, but this one is so well done! Instead of fictionalising the life of the artist, it combines a non-fiction element of who Henri Matisse was and what he did with the story of a fictional young girl who seems to be doing a biography about him.

This is a wonderfully creative way to treat a biography of a person or a story of an event.