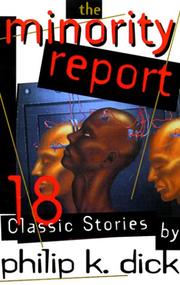 In the world of The Minority Report, Commissioner John Anderton is the one to thank for the lack of crime. He is the originator of the Precrime System, which uses "precogs"--people with the power to see into the future--to identify criminals before they can do any harm. Unfortunately for Anderton, his precogs perceive him as the next criminal. But Anderton knows he has never contemplated such a thing, and this knowledge proves the precogs are fallible. Now, whichever way he turns, Anderton is doomed--unless he can find the precogs's "minority report"--the dissenting voice that represents his one hope of getting at the truth in time to save himself from his own system.A film version of The Minority Report, directed by Steven Spielberg and starring Tom Cruise, will be released this summer--further proof of the enduring appeal of Philip K. Dick's visionary fiction.From the Hardcover edition.

Couldn't believe how different the story was between the movie and the original short story.

SPOILER ALERT: At the center of the action in the short story is how a foreknowledge feedback is inevitable. At no time where the mutants held against their will and "rescued." There were no corrupt actors, but they behaved exactly how you would expect in order to maximize their outcomes. It's a satisfyingly complex look at probable futures, behavior, and motivations. The more I read Philip K. Dick, the more I like him.