How to Get Filthy Rich in Rising Asia 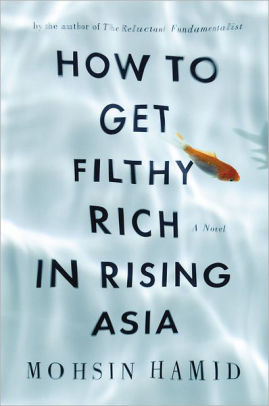 How to Get Filthy Rich in Rising Asia is the third novel by writer Mohsin Hamid.The novel uses a second-person perspective, referring to the protagonist only as "you." The story takes place in an unnamed country that resembles Hamid's home country of Pakistan. It details the protagonist's beginnings as a poor boy, and quest for wealth and love as he moves to the city and enters the bottled water business. The Telegraph called it "his most impressive yet"; other critics did not regard it as a highly as his previous novel, The Reluctant Fundamentalist.

I can't say that this is my favorite book, but I can tell you that it is very good. about 50% is a captivating narrative, and the other 50% is an emotional sledgehammer. If you have the opportunity, give this book a chance...I hope (and honestly believe) you will like it.

Interesting but not moving. Funny how the second person, which forces the reader into the role of protagonist, almost always makes it harder for me to connect to the narrative. (The exception happens to be my favorite book, If on a Winter's Night a Traveler.)