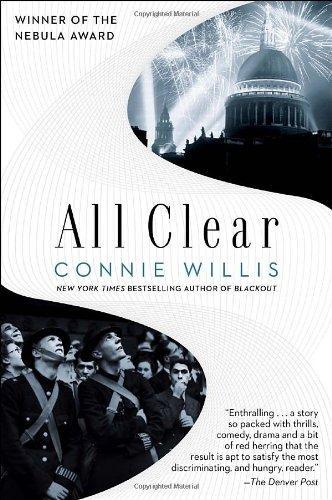 ‘All Time is Irredeemable’: Why “Stable Timeline” Time-Travel Stories Don't Work For Me

Note: this is not so much a review as it is a rant about the 'stable timeline' family of time-travel theories. You have been warned. Spoilers for Blackout/All Clear follow, though they are vague structural sort of spoilers rather than detail-laden ones.

Time travel stories of the “stable timeline” variety disconcert me. You know the type - the stories where you wait for everything to fall into place, because you know every single one has been carved out carefully with sandpapered edges; “it always happened this way” stories; stories where the universe is one big self-correcting mechanism that snips away at its own inhabitants so the right things happen at exactly the times they were planned. It’s like human agency has been written out of these tales entirely - whatever you have chosen, you have always chosen; …

‘All Time is Irredeemable’: Why “Stable Timeline” Time-Travel Stories Don't Work For Me

Note: this is not so much a review as it is a rant about the 'stable timeline' family of time-travel theories. You have been warned. Spoilers for Blackout/All Clear follow, though they are vague structural sort of spoilers rather than detail-laden ones.

Time travel stories of the “stable timeline” variety disconcert me. You know the type - the stories where you wait for everything to fall into place, because you know every single one has been carved out carefully with sandpapered edges; “it always happened this way” stories; stories where the universe is one big self-correcting mechanism that snips away at its own inhabitants so the right things happen at exactly the times they were planned. It’s like human agency has been written out of these tales entirely - whatever you have chosen, you have always chosen; there is always the dubious comfort of knowing that whatever one is worrying about has already been resolved (or not). There is nothing one can do. Or - there is, but it has already been done, and eventually it will happen. Patience is key.

Blackout/All Clear is that kind of story. Which is not to say that it is a bad or unsatisfying one, of course - it might need a bit (okay, a lot) of fat trimmed, but all the interlocking pieces fit, more or less, and the contraption functions as it should. The emotional payoff is largely there, and the central problem is resolved with some sacrifice, in the calculated messiness [1] of the near happy-ever-after. But a dissonance hangs over the otherwise neat/calculatedly messy ending: Willis spends the whole story trying to prove exactly how much every little bit of human agency and human goodness matters (the books are part celebration of the courage of the everyday and the ordinary, part time-travel escapade), but the mechanism that guides the entire story - the entire notion of time travel and the way it works - runs completely counter to such ideas about agency.

If anything, the sort of time travel that is present in the story says instead that human agency is an illusion, because everything was planned out by the self-correcting entity that is the space-time continuum. Time travel, in Willis’ series, has several basic rules and concepts:

(1) The “net” (portal that allows travel to the past) is believed to not allow discrepancies to occur, i.e. It is self-correcting.

(1a) Because of rule (1), if a historian from the future attempts to visit a “divergence point” - that is, a point in time where there are instabilities, in that small changes can bring about a large difference in outcome (e.g. important assassinations), then the “net” will open at a later time. The in-universe jargon for this is “slippage”.

(2) You cannot be in two places at the same time - that is, if you have travelled to a part of the past and remained there for a period of time, that particular period is now completely off limits to your present self.

(2a) Corollary of rule (2) is that, if you travel to a time before that which you previously were present in, the date you previously arrived in the past becomes a deadline. You will die before or on the deadline in order to avoid violating rule (2). [2]

These rules, as presented initially, do nothing between them to rule out human agency at non-“divergence points”. That is, Willis initially seems to follow the model where anything can be altered, except certain important historical events, resulting in an agency that is restricted, but not completely obliterated. In fact it only restricts the agency of time-travelling historians, since the “divergence points” are fixed by the acts and choices of people in the past and cannot now be changed, but the people in the past could conceivably have made different choices altogether and so precipitated different outcomes. This sort of restraint on agency is still acceptable, and is also necessary to explain the coherence of the time-travel model and how space-time hangs together - or so goes the argument.

But Willis arguably takes this model even further, creating a story in which the presence and actions of the time travellers were part of the timeline all along, which is explained somewhat hand-wavily by invoking the “stable timeline” model. [3] The time traveller has always acted in a certain way - and it is in fact his acting in that way, combined with existing historical events, that leads to the actual outcome that forms the past. All the events in the narrative are therefore slotted in at various points, and the mystery is not what will happen, but what has already happened.

The plot thus hinges upon characters’ lack of knowledge, or deficiencies in knowledge - which of course is not illegitimate in the least (there wouldn’t be a legitimate story in the world if it was, since narrative and mystery all to some degree rely on either dramatic irony or a tension between what is known and what is actually true). Combine this epistemological blindness with the lack of agency that the “stable timeline” model requires, however, and there emerges an alarming absence of any actual human role in the structural narrative. [4]

This absence is not in itself damning - there is nothing doctrinally wrong with a narrative in which the universe refuses any sort of human influence, or a story which is based upon the impotence of humanity to change anything; some might argue it in fact reflects the universe we are in. [5] But within Willis’ created narrative it is in opposition to the emphasis she means to place on the ordinary and the mundane - the courage shown by civilians during the war, and the vital importance of every individual in creating history and reaching a desirable outcome (in Blackout/All Clear, winning WWII).

Or perhaps - thinking about this more charitably - it is not dissonance but juxtaposition. Is not the point that we, despite knowing the struggle is ultimately fruitless, continue to face the horrible snake-pits of the universe, and that this is a brave and noble thing? It’s a point that has been made many times, though rarely with unqualified success. But it is not what Willis means to say. [6] One cannot have one’s proverbial cake and eat it too, and a world in which human beings have (near) unfettered agency and one where “this has always happened” is axiomatically true are incompatible.

The title draws from T.S. Eliot’s Four Quartets; the full lines are:

Time present and time past
Are both perhaps present in time future,
And time future contained in time past.
If all time is eternally present
All time is unredeemable.

[1] The nearly happy-ever-after sort of ending, which seems to be in vogue as far as ‘literary’ novels are concerned, doesn’t capitulate entirely to the need for everything to be tidily resolved. It allows a character death (of a protagonist or ‘good’ non-protagonist character) or two, and some sacrifices, but this accounting for what is presumably the inherent unfairness of the universe still seems calculated to me. It’s like you can’t have an unqualified happiness - because to do so would be twee, would be foolish. That isn’t necessarily the case. Optimism isn’t always foolish; believing that things can and will work out does not a less profound worldview make.

[2] This is where the universe comes in, I suppose, to iron out the discrepancies.

[3] I described what I meant by “stable time-line” time travel stories at the beginning, but for a more rigorous definition: a stable timeline model of time travel takes as its premise that everything that has happened and ever will has already happened in the sense that events are fixed. Events, even those in the future, have already happened in that they cannot be affected by changes to the timeline, even in the past. To wit: there are no such things as “paradoxes” - doing something to change the outcome of historical event A, which would lead to events changing such that time travel was never invented, is an impossible series of happenings. Everything that has happened to get you, the time traveller, to this point (stepping into the net) has already happened and will always happen.

[4] Which explains in part why sections of the book where Willis’ characters endlessly speculate and worry about their impact on historical events are not only annoying in the moment but also meaningless in retrospect, because based on Willis’ own model of time travel they cannot have changed anything - or if they do, it was always meant to be this way. Fatalists are never worriers, which is also why fatalism is ultimately another dull trope - there is no tension (unless one attempts to thwart “fate”) and no real driving force. Blackout/All Clear avoids this by having characters not actually know the rules of time travel, which I can't honestly say completely worked out.

[5] A discussion for another day: whether “realism” in narrative is necessarily desirable, and logical extensions of suspending disbelief (that is, if you are willing to believe that in this fictional universe time travel exists, you cannot also believe that only one model of time travel is possible because it is more “realistic”, all other things being equal).

[6] To be fair Willis does critique the notion that good intentions necessarily manifest as good outcomes, though she summarily scuppers that with the near happy-ever-after ending. World War II is won by the Allied Powers, as it always has been, and so good intentions do end up creating the historically ‘best’ outcome.