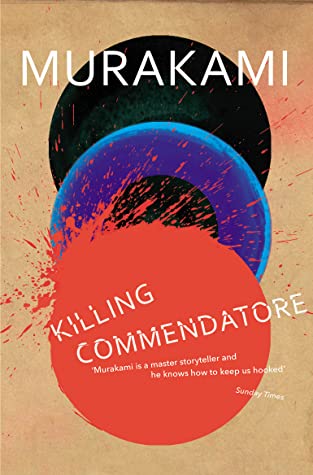 When a thirty-something portrait painter is abandoned by his wife, he secludes himself in the mountain home of a world famous artist. One day, the young painter hears a noise from the attic, and upon investigation, he discovers a previously unseen painting. By unearthing this hidden work of art, he unintentionally opens a circle of mysterious circumstances; and to close it, he must undertake a perilous journey into a netherworld that only Haruki Murakami could conjure.

Content warning There are mild spoilers about topics and small pieces of content contained in the work; a mention of sexual assault; and something that feels dangerously close to sexualisation of a child's body

I have a weird relationship with Murakami.

In looking over his bibliography on Wikipedia, i see that i have read every one of his novels except for "After Dark" and "Kafka on the Shore" (i know, probably a weird one to have skipped, but a friend of mine deeply disliked it many years ago, so i've always just had it in the back of my mind that i would tackle it eventually, just not yet). In fact, i've read all of them twice, except for "Norwegian Wood", "Dance, Dance, Dance", and "Sputnik Sweetheart". This was my second time reading Killing Commendatore.

So, i dunno, i feel like i should have a pretty good handle on Murakami, but i really don't.

Many of his motifs now stand out to me, i suppose, and it's interesting to watch them shift throughout his lifetime. I have a good feeling for the general atmosphere of his works. I know that he really seems to like music and women's ears. I get the feeling that he's generally not really into Capitalism, but he also doesn't really seem to feel very inspired by the sixties' student movement. There's a lot of ambivalence and indecision in his protagonists, and most of his protagonists kind of blend together. Idk. I could go on, but here's the point i'm trying to make: i can note these details, and i have spent a lot of time buried in the atmosphere of his works, but… i suck at metaphor, so i'm not really sure that i understand the works very well.

Killing Commendatore is no exception here. What's especially embarrassing is that, like, i feel like he goes out of his way to explain what some of his metaphors mean here, and i'm still not sure i understand.

But i don't mean this as a criticism; i'm not sure if that's clear. I think part of what draws me back to his works is exactly that i don't entirely understand them, but generally speaking there's a vibe there that resonates with me; and i feel as though i could understand, that understanding is close to within my grasp. So, i read again, and think again.

I have a similar relationship to David Lynch. As particular examples, i like Blue Velvet and Mulholland Drive, and have seen both a couple of times. But my favorites are Inland Empire and Twin Peaks: Fire Walk With Me. The latter is for profound resonance reasons; but the former is because i feel as though i can almost make sense of the film, but not quite, and i feel something resonant there. So, i return from time to time.

I often think that this is a foolish way of doing things. I never read others' interpretations of these works, and i generally don't take notes that would help bring things together. I don't know why this is. Something in me stops me, i guess. I guess that… reading others' interpretations is challenging because i'm prone to taking on others' ideas wholesale and squelching my own, because i don't always value my own opinion; i'm also embarrassed every time someone points out obvious interpretations that i missed, which is a foolish way to feel, as i'll never grow without communicating and being taught. These two are always in tension: the need to learn and grow and the need to not steamroll myself. Notes are difficult because, one, i'm bad at not writing every last little thing down; and, two, writing has a way of pulling me out of the headspace i'm trying to enjoy when taking in a work. So. Yeah. Still, i feel foolish in not doing these things that would assuredly help me to grow more steadily.

For the most part, i've enjoyed reading this text, and I'd recommend it to folks who like Murakami. It feels like he senses the end his life now on the horizon, and there's certainly a vibe of someone looking back over his life here, and trying to leave some breadcrumbs behind for after he's gone. I dunno, this is just a feeling i get. The theme of traversing an invisible boundary—made literal—between absence and presence was resonant for me, someone who has a difficult time remembering that life is happening to it all the time, and that remaining absent is costly in its own ways. I think i generally enjoyed spending time in this world. Moreover, i just get a certain feeling when i read his works that it feels meaningful to spend time with. This book is not the Wind-Up Bird Chronicle or 1Q84 if one is looking to read those again—it feels less grand and sprawling. It feels more straightforward, almost like a folktale, than some vast epic of literature. And i think that suits Murakami well.

Some things i'm not a fan of: i've never been a huge fan of Murakami writing women. Some things he writes about the interactions between men and women make sense to me. For example, the way that women are asked to and do hide themselves; the ways that they react strongly to foolishness of men in their lives, and the hurt that men unknowingly cause because they are raised to think only of themselves; the ways it can be frustrating for men to be so slow on the uptake. But… he also just… i dunno. He's very strange about women. His writing often dissects the women in his stories, in that he loves to select from their features and describe them in a way that feels leery and uncomfortable for me—very "male gaze" sort of thing. When he describes sex, in particular, it makes me kind of nauseous—it vaguely reminds me of reading online erotica, in that leering "parts not people" way; i dunno, maybe i'm just a demisexual grey ace queer. But even more, when he writes from a woman's perspective, it's… uncomfortable at times. For example, apparently women only think about their features—especially their tits—all the time. Like, in this book in particular, there's a long passage from the perspective of a pubescent girl, and Murakami can't go more than a few pages without her being sad that her chest hasn't yet started to develop. Now, because i'm bad at metaphor, it may certainly be that this is meant to stand in for something that i'm not picking up on. But that doesn't mean that it doesn't still feel leery and really uncomfortable to hear an aged man author go on at length about a young girl's flat chest, and how it reminds him of his dead sister's flat chest (which he also goes on about a bit early on in the book). Similarly, there's a conversation somewhat near the middle of the book where he speaks frankly about his penis with this same girl. Like… it's not leering or aggressive or anything other than a sharing of fact, but it still leaves me feeling uncomfortable. Oh! And the sexual assault in a dream bit is A Lot.

I think that, at least for the time being, i press on with his writing because there's something there—something i still find ineffable—that i get from it. But it's difficult at times, and i'm not convinced i will always feel this way.

So, if you're a fan of Murakami—and sort of know what you're in for with his writing generally—you may want to pick this one up. Just… tread with caution.

I usually love Murakami, but this one? This one has failed me. The main character is your typical boring straight guy whose arrogance peeks through a humble facade. That's fine, that's forgivable. But his detailed fixation on his dead 12-year-old sister's breasts? Even reminiscing about them as she lay in her coffin?! Nahhhhh, time to set this book down. I've been fighting to keep my attention on this book because I know Murakami's writing is usually a slow burn. But I've never had to work this hard to stick with a book. 113 pages in, any fight I had left was gone. I'm so disappointed.

I usually love Murakami, but this one? This one has failed me. The main character is your typical boring straight guy whose arrogance peeks through a humble facade. That's fine, that's forgivable. But his detailed fixation on his dead 12-year-old sister's breasts? Even reminiscing about them as she lay in her coffin?! Nahhhhh, time to set this book down. I've been fighting to keep my attention on this book because I know Murakami's writing is usually a slow burn. But I've never had to work this hard to stick with a book. 113 pages in, any fight I had left was gone. I'm so disappointed.