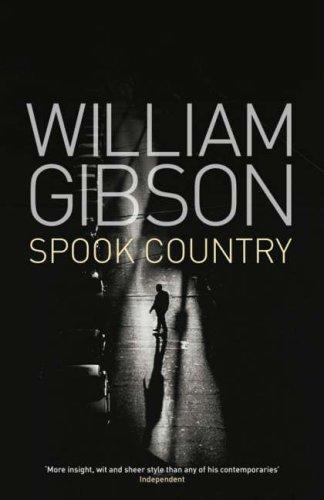 Spook Country is a 2007 novel by speculative fiction author William Gibson. A political thriller set in contemporary North America, it followed on from the author's previous novel, Pattern Recognition (2003), and was succeeded in 2010 by Zero History, which featured much of the same core cast of characters. The plot comprises the intersecting tales of three protagonists: Hollis Henry, a musician-turned-journalist researching a story on locative art; Tito, a young Cuban-Chinese operative whose family is on occasion in the employ of a renegade ex-CIA agent; and Milgrim, a drug-addled translator held captive by Brown, a strangely authoritarian and secretive man. Themes explored include the ubiquity of locative technology, the eversion of cyberspace and the political climate of the United States in the aftermath of the September 11, 2001 attacks. Spook Country quickly reached mainstream North American bestseller lists and was nominated for British Science Fiction Association and Locus Awards.