An Informal History of the English Language in the United States 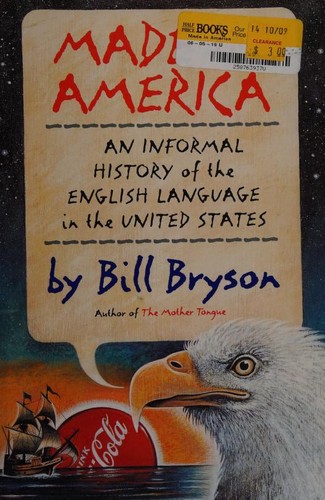 Bill Bryson turns away from the highways and byways of middle America, so hilariously depicted in his bestselling The Lost Continent, for a fast, exhilarating ride along the Route 66 of American language and popular culture.

In Made in America, Bryson de-mythologizes his native land - explaining how a dusty desert hamlet with neither woods nor holly became Hollywood, how the Wild West wasn't won, why Americans say 'lootenant' and 'Toosday', how Americans were eating junk food long before the word itself was cooked up - as well as exposing the true origins of the G-string, the original $64,000 question and Dr Kellogg of cornflakes fame.

Although I don’t live in America, it is obvious that they have had a big influence on the English language. Bill Bryson’s ‘Made In America’ explores the history of America and the effects it had on the language. I found the most interesting parts to do with censorship in America, from titbit becoming tidbit, cockroach becoming roach and to the extreme case of political correction which wanted to stop the use of terms like blackeye and blacksmith (but interestingly enough, not blackout). I feel I’ve gained some valuable insight into why American English is different to the commonly used Queens’ English, while getting a history into commonly used terms. Bill Bryson writes in such a way that it makes this book easy to read and at times humorous, which I feel is what you want in a Non Fiction book.