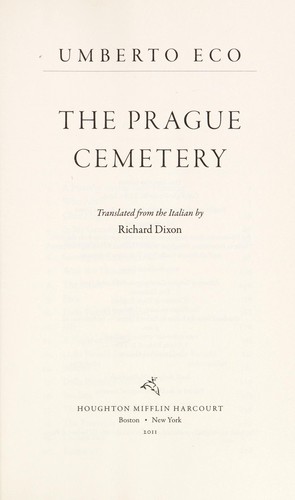 "19th-century Europe--from Turin to Prague to Paris--abounds with the ghastly and the mysterious. Jesuits plot against Freemasons. In Italy, republicans strangle priests with their own intestines. In France, during the Paris Commune, people eat mice, plan bombings and rebellions in the streets, and celebrate Black Masses. Every nation has its own secret service, perpetrating conspiracies and even massacres. There are false beards, false lawyers, false wills, even false deaths. From the Dreyfus Affair to the Protocols of the Elders of Zion, the Jews are blamed for everything. One man connects each of these threads into a massive crazy-quilt conspiracy within conspiracies. Here, he confesses all, thanks to Umberto Eco's ingenious imagination--a thrill-ride through the underbelly of actual, world-shattering events. "--