The Political Economy of the Mass Media 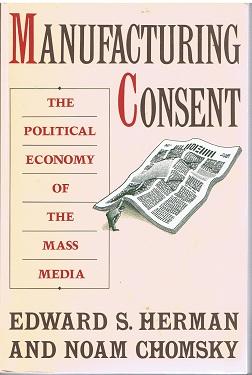 In this work, Edward S. Herman and Noam Chomsky show that, contrary to the usual image of the news media as cantankerous, obstinate, and ubiquitous in their search for truth and defense of justice, in their actual practice they defend the economic, social, and political agendas of the privileged groups that dominate domestic society, the state, and the global order. Based on a series of case studies—including the media’s dichotomous treatment of “worthy” versus “unworthy” victims, “legitimizing” and “meaningless” Third World elections, and devastating critiques of media coverage of the U.S. wars against Indochina—Herman and Chomsky draw on decades of criticism and research to propose a Propaganda Model to explain the media’s behavior and performance. Their new introduction updates the Propaganda Model and the earlier case studies, and it discusses several other applications.

Despite giving this book 5 stars, I have some criticisms. To its credit, this book is pretty damning with its rebuke of U.S. mainstream media propaganda, and provides exhaustive case studies that back its claims. I do however think some arguments could have been even stronger.

Despite giving this book 5 stars, I have some criticisms. To its credit, this book is pretty damning with its rebuke of U.S. mainstream media propaganda, and provides exhaustive case studies that back its claims. I do however think some arguments could have been even stronger.

1. The authors (Herman and Chomsky) cite reporting that they themselves don't scrutinize. Namely, reporting from Amnesty International. They do the very thing with Amnesty International that they are accusing the mainstream media of doing with U.S. Government propaganda. They report it without analysis, as if it's fact. I am not claiming that Amnesty International is a bad source. Quite the contrary. I greatly admire the organization (I'd even love to work for them). But the authors should go through the same effort of proving why Amnesty International is providing trustworthy information each time they cite them, just as they did with proving why the targets of their case studies were untrustworthy. Proving untrustworthiness is good, but they should have also proven why trustworthy sources were trustworthy. I know what my readers are thinking. "Oh, c'mon, it's Amnesty International." Yeah, I understand that response. But if we are going to learn to recognize when consent is being manufactured, we must also apply that same standard to sources that we trust. Because blindly trusting news sources is part of the problem.

2. They don't appear to research the phenomenon of manufacturing consent for the countries whose governments they either criticized or had a favorable view of. For example, they did a good job of showing why the U.S. reporting on Guatemala, El Salvador, and Nicaragua was bad. But the authors did not analyze the media of these governments to see if the reporting out of them were following the same propaganda model that the U.S. media was doing. Thus, further complicating the analysis of truth. And yes, those that have been paying attention are well aware of what the U.S. has been doing in Central and South America, as well as the media's complacency. But their media still should have been analyzed. Because it creates a conundrum. Could their media also have been manufacturing of consent?

3. There were not many cases studies. A half dozen or so. I think the book would have provided a stronger argument if the case study presentations were shorter, and the authors included more case studies. Not far into each case study, I got it, as I assume most readers did. I didn't need 30 more pages. Condense each case study, give a couple examples why the U.S. media supported baseless U.S. government propaganda, a couple pages on why your trusted souses were in fact trusted, then move on to another case study. Do that 100 times. It would have made for a better argument. As it is, someone who disagreed with this book could, in bad-faith, just claim that these were isolated examples.

You can blame the effectiveness of this book for my critique. It worked. And ironically it made me see some errors the authors made by applying the very same type of analysis to their book that they do to the U.S. media.

This book should be required reading for people studying journalism at colleges and universities. They need to question everything every government reports to them to see if there's any validity to the information. As it is now, they seem to merely act as stenographers for governments and big business; blindly just relaying their press releases.

Despite my criticism (I typically am still able to criticize books I rate 5 stars), I thought the book was amazing and eye-opening. I found myself constantly pissed off at the propaganda examples, and how the manufactured narrative of mainstream media reporting has a direct, deadly harm to people on a worldwide level.