(Remembrance of Earth's Past #2) 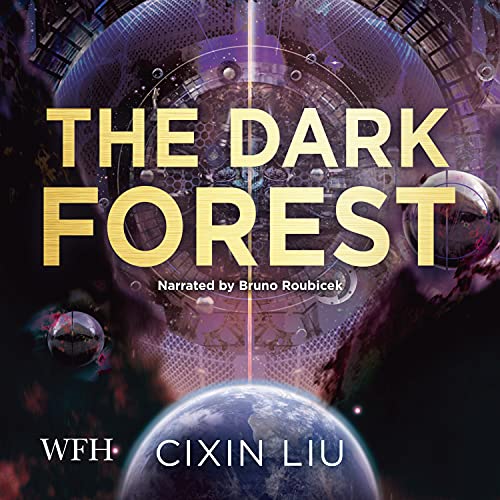 In The Dark Forest, Earth is reeling from the revelation of a coming alien invasion-in just four centuries' time. The aliens' human collaborators may have been defeated, but the presence of the sophons, the subatomic particles that allow Trisolaris instant access to all human information, means that Earth's defense plans are totally exposed to the enemy. Only the human mind remains a secret. This is the motivation for the Wallfacer Project, a daring plan that grants four men enormous resources to design secret strategies, hidden through deceit and misdirection from Earth and Trisolaris alike. Three of the Wallfacers are influential statesmen and scientists, but the fourth is a total unknown. Luo Ji, an unambitious Chinese astronomer and sociologist, is baffled by his new status. All he knows is that he's the one Wallfacer that Trisolaris wants dead.

Nerd fantasy fulfillment, both to its benefit and detriment.

Maybe has a gimmick worth reading, but only if written by an author with more respect for his readers' intelligence. This feels like it's talking down to you all the time it's dragging you through its characters' pain and violence and dumb quips and hollow insights.

(I should know better than rely on Best-of-the-Year picks chosen by poll.)

Great overview of folk horror. A bit long-winded at times, but a good introduction nonetheless.

Lots of false starts with this one. It was enjoyable, but I couldn't sustain interest for long periods. An hour or two at most and then my mind would wander.

I listened to this over a long few months, stopping when it made me feel too anxious. Sad, frightening—and discouraging. I thought I had hope, but discovered it is instead complacency and ignorance.

Easy to read, middle of the road military-scifi. Good trash fiction for a trash future.

Really enjoyed how it ended.

Fun, accessible, easy to follow, sprinkled with etymologies and did-you-knows; it's a few steps up from "Greek Myth for Dummies" but not at all academic or concerned with canonicity.

More accurately, “The Cigarette in the 20th Century: An American Political History.”

While not as broad in scope nor in geography as I would have liked—and known if I’d read the description more carefully—I felt like I learned quite a lot from this book. Though US-centric, I thought it worthwhile; not sure if its insights are its own or simply new to me, but I liked to consider aspects of its history like government by partly-private associations, the complicated decisions further complicated by party philosophies, money, changing expectations of policy and health and etc.

A fascinating topic, well written and easy to follow—but goodness is there too much about one man, Woese. There’s a better book in here that has less biography and more follow up on other scientists’ work, I feel.

Humour and anger work well together.

Came out of it not feeling as if I learned much that is totally new, but was much more convinced of what I did know and believe.

Fascinating, with many insights and connections I had never come across before. Shame the middle sags with the smaller, less propulsive politicking of the ruling classes.

A really interesting fictional account of what would have happened if Michaelangelo had built a bridge for the sultan of Constantinople.