a story of justice and redemption 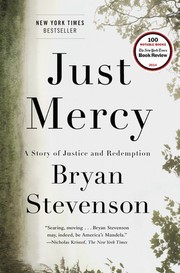 The founder of the Equal Justice Initiative in Montgomery, Alabama recounts his experiences as a lawyer working to assist those desperately in need, reflecting on his pursuit of the ideal of compassion in American justice.

This book is as beautifully written as it is gutwrenchingly awful to read. The injustices described are horrible, but not surprising - the New Jim Crow at work. The author makes a powerful statement towards the end that we lock up people we can't bear to think about (and especially not to empathize with) because it's a mirror into the brokenness of us all. We think it's an easier solution, and in some ways it probably is easier than mercy. But we need more stonecatchers in this world.

Read this on the suggestion of my wonderful partner. This is a gripping, beautiful, and frustrating read, in which I learned a lot more about how our criminal justice system is terrible. It's a tribute to the author's clients and the unknown prisoners who are like them, as well as the communities around them. It lacks a strong call to action - this is how you can help! - but I think that it's not really necessary in this book, and I don't think he has any "innovative solutions" to the problem of our justice system. What he emphasizes, though, is the power of kindness and "just mercy," and he also highlights some "lead bullet" (as opposed to silver bullet) things you can do to help out.

Just Mercy is an autobiography of Bryan Stevenson, a criminal justice lawyer who founded the Equal Justice Initiative. As he explained it to Rosa Parks, the EJI is:

Just Mercy is an autobiography of Bryan Stevenson, a criminal justice lawyer who founded the Equal Justice Initiative. As he explained it to Rosa Parks, the EJI is:

In this book, he tells the stories of the people he has helped over the course of his career. Innocent men and men with mental disabilities put on death row. Women wrongfully imprisoned. Children tried and imprisoned as adults. These are just a few.

In their broken state, they were judged and condemned by people whose commitment to fairness had been broken by cynicism, hopelessness, and prejudice.

I will not lie, this book is a very hard read. At times, I found myself crying with a heart full of sadness and anger. I’m talking shoulder shaking sloppy crying. Yet, I also found myself shedding tears of hope, found in a new understanding of the profound connectedness of our humanity. This book left me a mess and I would not have it any other way. Profound joy and hope cannot be experienced without earth shaking sorrow and despair. Bryan gives you many stories that, if left on their own, would lead you to despair. But every one is accompanied by his tireless compassion, unshakable desire for justice and deep well of mercy. It’s in the juxtaposition that the book makes its most memorable and profound statements.

I reflected on how mass imprisonment has littered the national landscape with carceral monuments of reckless and excessive punishment and ravaged communities with our hopeless willingness to condemn and discard the most vulnerable among us. I told the congregation that Walter’s case had taught me that the death penalty is not about whether people deserve to die for the crimes they commit. The real question of capital punishment in this country is, Do we deserve to kill?