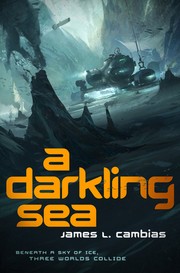 On the planet Ilmatar, under a roof of ice a kilometer thick, a team of deep-sea diving scientists investigates the blind alien race that lives below. The Terran explorers have made an uneasy truce with the Sholen, their first extraterrestrial contact: so long as they don't disturb the Ilmataran habitat, they're free to conduct their missions in peace. But when Henri Kerlerec, media personality and reckless adventurer, ends up sliced open by curious Ilmatarans, tensions between Terran and Sholen erupt, leading to a diplomatic disaster that threatens to escalate to war. Against the backdrop of deep-sea guerrilla conflict, a new age of human exploration begins as alien cultures collide. Both sides seek the aid of the newly enlightened Ilmatarans. But what this struggle means for the natives, and the future of human exploration is anything but certain.

I found the characters and ethical dimensions of the story not too deep (pun not intended, but I'm keeping it), but it does do a nice job of imagining what a civilization that evolved deep underwater might be like.