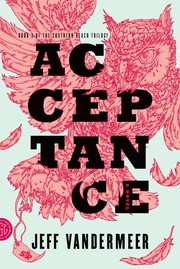 It is winter in Area X, the mysterious wilderness that has defied explanation for thirty years, rebuffing expedition after expedition, refusing to reveal its secrets. As Area X expands, the agency tasked with investigating and overseeing it--the Southern Reach--has collapsed on itself in confusion. Now one last, desperate team crosses the border, determined to reach a remote island that may hold the answers they've been seeking. If they fail, the outer world is in peril.

Meanwhile, Acceptance tunnels ever deeper into the circumstances surrounding the creation of Area X--what initiated this unnatural upheaval? Among the many who have tried, who has gotten close to understanding Area X--and who may have been corrupted by it?

In this New York Times bestselling final installment of Jeff VanderMeer's Southern Reach trilogy, the mysteries of Area X may be solved, but their consequences and implications are no less profound--or terrifying.

I don't think I liked this book quite as much as the previous two, but it still sucked me in and I'm not sure how better the trilogy could have been wrapped up. There are a lot of still unanswered questions at the end, which feels fitting but something about the style of this one felt like a tease, where the previous two volumes felt more convincingly like the answers simply weren't there to be had.

I still love and strongly recommend this trilogy overall.

An entirely good finish to the story, even if nothing really made sense.