the physical aspect of the living cell ; with, Mind and matter ; & Autobiographical sketches 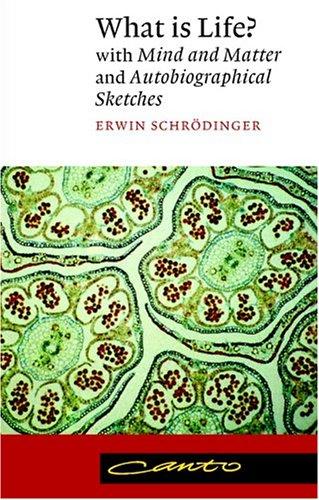 What Is Life? is a 1944 non-fiction science book written for the lay reader by physicist Erwin Schrödinger. The book was based on a course of public lectures delivered by Schrödinger in February 1943 at Trinity College, Dublin. Schrödinger's lecture focused on one important question: "how can the events in space and time which take place within the spatial boundary of a living organism be accounted for by physics and chemistry?" In the book, Schrödinger introduced the idea of an "aperiodic crystal" that contained genetic information in its configuration of covalent chemical bonds. In the 1950s, this idea stimulated enthusiasm for discovering the genetic molecule and would give both Francis Crick and James Watson initial inspiration in their research.

Succinct physical basis for the search for the molecular nature of the genome, 10 years before the structure of DNA. Cited in the 8th Day of Creation as an influence to many young scientists joining that search, neatly done.