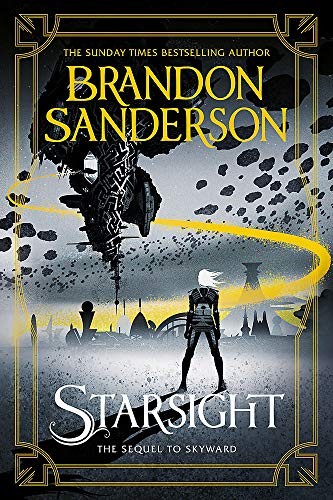 All her life, Spensa has dreamed of becoming a pilot. Of proving she's a hero like her father. She made it to the sky, but the truths she learned about her father were crushing.

Spensa is sure there's more to the story. And she's sure that whatever happened to her father in his starship could happen to her. When she made it outside the protective shell of her planet, she heard the stars--and it was terrifying. Everything Spensa has been taught about her world is a lie.

But Spensa also discovered a few other things about herself--and she'll travel to the end of the galaxy to save humankind if she needs to.

(part 2 of a trilogy - entertaining, but review/ summary in part 3)

I'm a fan of Sanderson and this is a classic Sanderson novel. Good characters, intricate setting, and a racing plot. One of my favorite things about his books is how he sets up a mystery for the characters to solve and effectively encourages the reader to do the same. Yet somehow, he always manages to stay one step ahead of me- I always think I know what the 'answer' is yet at the end, I'm always proven wrong and the real answer is far more interesting than what I expected. This happens again here and in hindsight there is plenty of cleverly hidden foreshadowing that would be rewarding to look through in a re-read.

For a full review, check out my blog: strakul.blogspot.com/2020/01/book-review-starsight-by-brandon.html