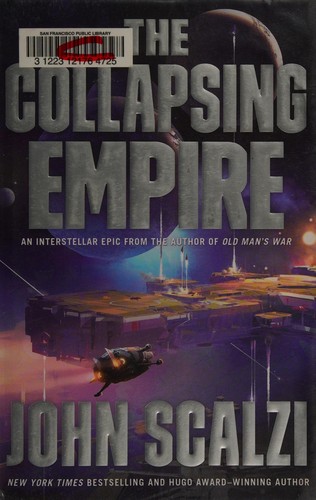 Faster than light travel is impossible--until the discovery of The Flow, an extradimensional field available at certain points in space-time, which can take us to other planets around other stars. Riding The Flow, humanity spreads to innumerable other worlds. Earth is forgotten. A new empire arises, the Interdependency, based on the doctrine that no one human outpost can survive without the others. It's a hedge against interstellar war--and, for the empire's rulers, a system of control. But when it's discovered that the entire Flow is moving, possibly separating all human worlds from one another forever, a scientist, a starship captain, and the emperox of the Interdependency must race to find out what can be salvaged from an empire on the brink of collapse. --

I love a space opera, especially when it's character-driven. Lots of snarky dialogues, great characters and worldbuilding that is not boring. I was pleasantly surprised by all the strong female characters. Kiva Lagos is awesome if you don't mind all the swearing. I could see lots of parallels from the Interdependency world with ours. It's that same old story: one family or group of people creates some myth/prophecy about the world in which skewed power relations are defined to justify the maintenance of the said world/society. This book is rich with political intrigue, commercial embargoes, power succession and environmental changes. I enjoyed the ride and I want to spend more time with the characters, so I'll read the next one.

This was an enjoyable, light read. The premise is very interesting and the humor and story telling are great. The characters are a bit bland, but engaging in their own right- you'll certainly be cheering for the good guys. Overall, this was pretty good book and I would recommend it for people looking for a quick read and lighthearted sci-fi fun. Bear in mind, that this appears to be the first of a series: the stage is set for subsequent books, which I hope Scalzi writes to fully explore the universe he has created!

For my full review, check out my blog: strakul.blogspot.com/2017/05/book-review-collapsing-empire-by-john.html