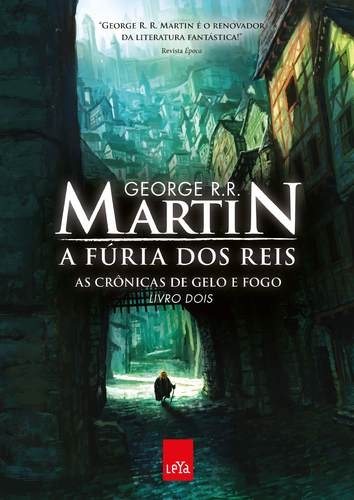 A Clash of Kings is the second novel in A Song of Ice and Fire, an epic fantasy series by American author George R. R. Martin expected to consist of seven volumes. It was first published on November 16, 1998 in the United Kingdom, although the first United States edition did not follow until February 2, 1999 Like its predecessor, A Game of Thrones, it won the Locus Award (in 1999) for Best Novel and was nominated for the Nebula Award (also in 1999) for best novel. In May 2005 Meisha Merlin released a limited edition of the novel, fully illustrated by John Howe. The novel has been adapted for television by HBO as the second season of the TV series Game of Thrones. A Clash of Kings is also the name of the first expansion to the Game of Thrones board game.

More of the same as book one... Quite enjoyable, very detailed.

Compared to the first novel, this one seems to drag on and on a bit. It wasn’t as exciting as book one, and all it did was left too many things unanswered and made me feel dirty with the way the sex scenes in it were written. The reset of the writing is good, the characters are great and it really set itself up for the next book but this felt more like padding than a progression of the story. I really like the shifting prospective in these books but with Clash of Kings I felt as if it was missing a lot of action and excitement.

I blogged about my issues with the writing here.