includes : the Hundred Thousand Kingdoms, the Broken Kingdoms, the Kingdom of Gods, the Awakened Kingdom (The Inheritance Trilogy #1-3.5) 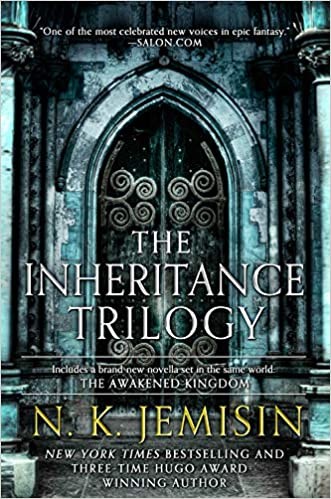 The Inheritance Trilogy omnibus includes the novels: The Hundred Thousand Kingdoms, The Broken Kingdoms, The Kingdom of Gods and a brand-new novella set in the same world. The Awakened Kingdom.

A REALM OF GODS AND MORTALS. Yeine Darr is an outcast from the barbarian north. But when her mother dies under mysterious circumstances, she is summoned to the majestic city of Sky. There, to her shock, Yeine is named an heiress to the king. But the throne of the Hundred Thousand Kingdoms is not easily won, and Yeine is thrust into a vicious power struggle.

that was long. and beautiful and exciting. i want to be a queer deity now and make love with chaos and death.

i think i might have read of a canon short story called "not the end" somewhere. does anyone know if that's true? and where to find it?

The worldbuilding in this is so lush, and the voices so great. Sieh was obviously my favorite character (Because Sieh is the best) though it's not like there was any narrator I particularly disliked.

There were certain parts I could tell Jemisin just loved writing, I don't know how to put it. Like, the narration in the Shrill novella, while I bet it was difficult to write, I sort of felt like she had a good time?

While I think I would recommend starting Jemisin through her short stories instead of a 1700 monolith, you do you. This is great.

This book was better than I expected. I was a bit hesitant at first since the second book wasn't as impressive as the first and this one had a god (Sieh) as the main character. Still, [a:N.K. Jemisin|2917917|N.K. Jemisin|http://photo.goodreads.com/authors/1243734625p2/2917917.jpg] is a great author and managed to capture my interest very quickly. Without spoiling it, the ending was great and powerful. Here's a more detailed review: strakul.blogspot.com/2012/02/book-review-kingdom-of-gods-by-nk.html