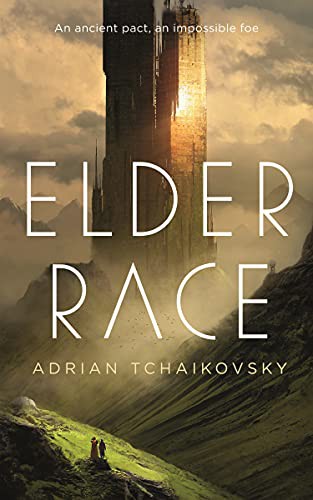 A junior anthropologist on a distant planet must help the locals he has sworn to study to save a planet from an unbeatable foe.

Lynesse is the lowly Fourth Daughter of the queen, and always getting in the way.

But a demon is terrorizing the land, and now she’s an adult (albeit barely) and although she still gets in the way, she understands that the only way to save her people is to invoke the pact between her family and the Elder sorcerer who has inhabited the local tower for as long as her people have lived here (though none in living memory has approached it).

But Elder Nyr isn’t a sorcerer, and he is forbidden to help, for his knowledge of science tells him the threat cannot possibly be a demon…

This was a good, quick read that had some interesting ideas. I wish it had explored some of those ideas a little more deeply, but then it may have overstayed its welcome.

Obvious comparisons to LeGuin's Rocannon's World , but it's different enough I didn't find myself thinking I should've just reread that instead.

A nice little read with interesting ideas. I’ve been reading loooong books these last months, so it’s a good reprieve from the big-plot-storage mindset.

I especially liked how the setting is fully compréhensible as a Fantasy and as a sci-fi setting. The world works as both, the characters become more aware of the other side's point of view, as the plot works well in both ways.