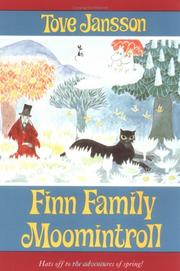 Finn Family Moomintroll (original Swedish title Trollkarlens hatt, ‘The Magician's Hat’; US edition The Happy Moomins) is the third in the series of Tove Jansson's Moomins books, published in Swedish in 1948 and translated to English in 1950. It owes its title in translation to the fact that it was the first Moomin book to be published in English, and was actually marketed as the first in the series until the 1980s.The 1961 English publication features a foreword "by Moominmamma", where she explains the nature of Moomins for fear that English children may not have heard of them; she also apologises for her "rottn" English. Otherwise, the book was translated by Elizabeth Portch.The novel forms the basis of episodes 1–8 in the 1990 TV series.

An absolutely wonderful set of stories.