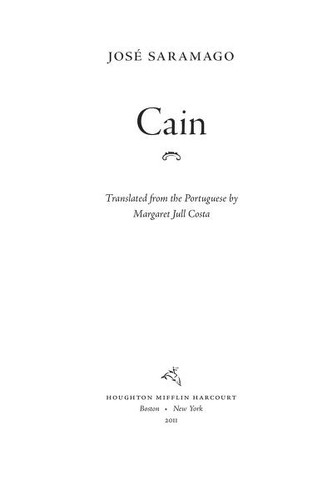 "In this, his last novel, Saramago daringly reimagines the characters and narratives of the Bible through the story of Cain. Condemned to wander forever after he kills Abel, he is whisked around in time and space. He experiences the almost-sacrifice of Isaac by Abraham, the Tower of Babel, the destruction of Sodom and Gomorrah, Joshua at the battle of Jericho, Job's ordeal, and finally Noah's ark and the Flood. And over and over again Cain encounters an unjust, even cruel God. A startling, beautifully written, and powerful book, in all ways a fitting end to Saramago's extraordinary career"--

for the lord is a vengeful god.