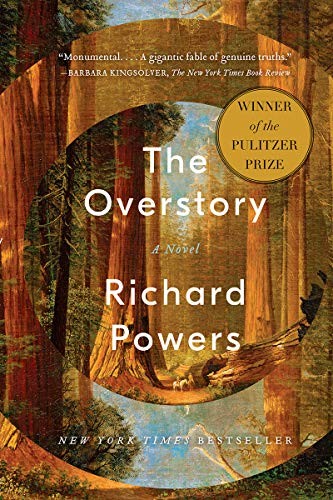 The Overstory, winner of the Pulitzer Prize in Fiction, is a sweeping, impassioned work of activism and resistance that is also a stunning evocation of—and paean to—the natural world. From the roots to the crown and back to the seeds, Richard Powers’s twelfth novel unfolds in concentric rings of interlocking fables that range from antebellum New York to the late twentieth-century Timber Wars of the Pacific Northwest and beyond. There is a world alongside ours—vast, slow, interconnected, resourceful, magnificently inventive, and almost invisible to us. This is the story of a handful of people who learn how to see that world and who are drawn up into its unfolding catastrophe.

This book pulled me into its world of trees and gutted me. I loved the richly drawn human characters and the stories they and the author tell about and learn from trees. I didn’t love the whiteness of the book, but also the relationship Powers describes between people and trees is a particularly white western one—some sense of indigenous stewardship before the end would have made that less irksome. But the book is beautiful and devastating to read, and I can’t stop thinking about trees.

This is beautiful writing, full of wonder and especially admiration for nature. I've always had deep cynical tendencies, in the Diogenes sense of that word, and while the pandemic was bringing those back to the surface this book lit them on fire. It doesn't offer pleasant answers, and maybe that's realistic, but it does offer beauty and sympathy that I was grateful for.

what do I know. this book is wonderful and I liked it very much but it's a little overly "writerly" at times and barely mentions indigenous cultures and their relationship to trees. Seems like a pretty serious omission.

Weaves together many strands into a beautiful whole. I haven't had a book resonate and change my outlook on the world in such a way in years and years

My notes on The Overstory: anaulin.org/blog/book-notes-the-overstory/

I loved this book, but was simultaneously disappointed at the lack of acknowledgement for Native knowledge on the themes of the book.

A remarkable, heartbreaking, life-affirming, breathtaking story. The tales of a handful of people and how they realise their lives are connected to other lives.

I will joyously pass this story on to others.