A Dead Djinn in Cairo 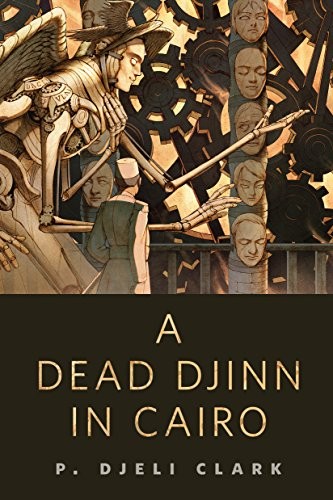 Egypt, 1912. In Cairo, the Ministry of Alchemy, Enchantments and Supernatural Entities investigate disturbances between the mortal and the (possibly) divine.

What starts off as an odd suicide case for Special Investigator Fatma el-Sha’arawi leads her through the city’s underbelly as she encounters rampaging ghouls, saucy assassins, clockwork angels, and a plot that could unravel time itself.

A fascinating story about an investigator looking into the death of a djinn in a steampunk version of Cairo. The investigation would lead her to conversations with an 'angel', fighting off ghouls and eventually meeting the old gods that the djinn worship from the beginning.

In this story, Cairo has become the heart of its own empire, made possible when a connection was formed with another dimension where djinn and various other spiritual denizens live. Through it, the djinn came, repelled the English and helped set up Cairo as the centre of a steampunk-ish nation with technology and magic.

But as in all tales involving djinn and magic, there is a darker side that is explored by the investigator, but it is only with the help of her wits can she possibly save the world from the hunger of old gods eager to devour mortals.

A lovely amuse bouche for Clark's steampunk Cairo stories, which has certainly left me wanting more of Fatma and of this world.

Quite a lot of story and world building packed into this novelette. And if you are into this sort of thing, there is a much longer sequel, "The Haunting of Tram Car 015" that fleshes out the setting even more.

A bit predictable as far as mysteries go, but really atmospheric. Recommended.