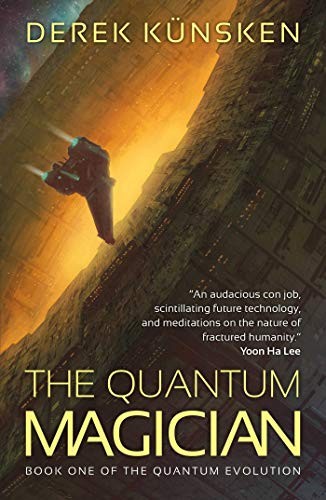 It was an interesting premise overall, with post humanism discussions and creepy religions. Lots going on here: complex worldbuilding. creative and unusual hard sci-fi concepts and bio-engineering of specialized human sub-species. There are different post-human beings that were heavily genetically modified, like Homo Quantus, who are able to make astounding leaps of intellectual analysis by stepping away from their individuality, Homo eridanus (The Mongrels): engineered people adapted to live in the deep sea floor and the creepiest of all, Homo pupa (The Puppets): a type of slave species who were genetically modified to experience awe under pheromonal cues of their masters. I gotta say some of the quantum philosophical passages about faith, existence and quantum calculations were boring to me. The part about Homo pupa and their blind worshipping was super disturbing, exploring the worst part of blind faith fanaticism.

Interesting concepts, well-made story, many characters have multiple dimensions, it can be read quickly.