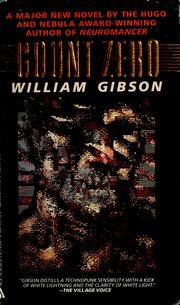 Count Zero is a science fiction novel by American-Canadian writer William Gibson, originally published in 1986. It is the second volume of the Sprawl trilogy, which begins with Neuromancer and concludes with Mona Lisa Overdrive, and is an example of the cyberpunk subgenre. Count Zero was serialized by Isaac Asimov's Science Fiction Magazine in the 1986 January (100th issue), February and March issues, accompanied by black and white art produced by J. K. Potter. The January cover is devoted to the story, with art by Hisaki Yasuda.

Coming back to this years later, and it's...