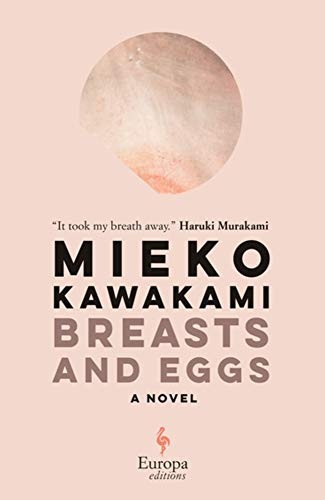 I do not know much Japanese, I especially do not know the Osaka dialect, so I cannot comment on the accuracy of the translation. I can see why Kirkus felt it was a bit flat though.

Basically- the book is about a family. Natsuko Natsume - the Protagonist, her older sister Makiko, and Makiko's daughter Midoriko. The first part is about how Makiko (who works at a hostess club) wants to get breast augmentation surgery, and the fact her daughter, Midoriko hasn't spoken to her in months. But it's interspersed with diary entries about Midoriko going through menarche.

The second part takes place many years later. Midoriko is now an adult, and yes, talking to her mother again. Natsuko wants to become a mother but does not want to have sex (I think she's sex-repulsed, in addition to being asexual) so she's looking into sperm donation.

Natsuko is a writer, and is basically researching sperm donation instead of researching her next novel.

To talk about the content warnings for a bit:

There's a scene in a bathhouse where someone on the woman's side who isn't sufficiently feminine enough for Natsuko is bathing (I got the impression this bather was probably a butch lesbian) and she is pissed off about it for several pages. I Think you're supposed to be "What the fuck Natsuko" instead of "Hmmm yes this woman who isn't womanly enough should get the hell out of the bath"

Now the gender essentialism. As the title might have clued you in on, the book is about both Breasts and Eggs. But there's some interesting stuff: Basically Natsuko doesn't feel in touch with her gender (I think this is partially due to the sex-repulsion) and you could totally read her as non-binary / trans. Basically, There's a lot of stuff about the power of a woman as mother (since Natsuko wants to be a single mother). There's a lot of stuff on Hetero-pessimism about how men suck that also isn't really challenged.

Now don't get me wrong: It talks about why men are like this, and while I am not looking for a "Hashtag NotAllMen" I also don't believe in throwing out all men, you know?

I suspect (given an interview I haven't read) that Kawakami wrote / rewrote this book in response to literary darlings like Haruki Murakami, whose women come across as flat in his books.

I think my problem with this is basically, as an AFAB non-binary person (who, admittedly, does not want children) I Don't Want to be reduced to breasts and eggs, even if it's possibly an improvement over being reduced to sex symbols.

I'd be interested in learning more about this book, but honestly, while I did not hate the book, I'd recommend starting with Ms. Ice Sandwich first.

What a beautiful book. I was scared by the reviews calling it a "feminist novel" but it was not what I was expecting. Whenever I read someone describing something as "feminist", I brace myself for something superficial, something that can only be envisioned in the realm of white feminism. This was not it. Granted, I have just recently started reading modern literature and this was my first real taste of Japanese literature, but this book felt like nothing I have ever read before. I have never read a book about women so profound and raw. I am enamoured with Mieko Kawakami writing and persona. I am already planning a reread (what have I become?).