The Utopia of Rules

On Technology, Stupidity, and the Secret Joys of Bureaucracy 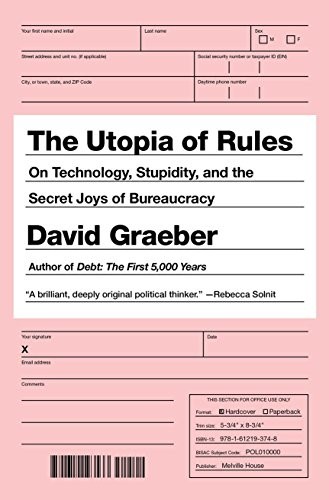 The Utopia of Rules: On Technology, Stupidity, and the Secret Joys of Bureaucracy is a 2015 book by anthropologist David Graeber about how people "relate to" and are influenced by bureaucracies. Graeber previously wrote Debt: The First 5000 Years and The Democracy Project, and was an organizer behind Occupy Wall Street. Graeber signed a book deal with Melville House toward the end of 2014, and The Utopia of Rules was released on February 24, 2015.

A collection of essays with an almost-clever title but too many detours.

Far too often, I found myself having to re-read parts of essays in order to understand whatever the main point was. There were so many times that the content just meandered somewhere, tried to build into the point, and created confusion about whatever he was trying to describe.

At one point, I was 40 pages into an essay with another 10-20 to go, and it started feeling like he was trying to justify why it was okay to like fantasy literature and games despite the bureaucracy within them. I doubt that was his intent, but that was precisely the way they felt due to the way he writes.

So much of what was said was entirely superfluous, which... is fine. But again, for someone who was touted as being the 'most readable' theorist, this was pretty unreadable.

Four or so essays on power, violence, and freedom, often through media critique and briefly sketched historical analogies. Themes of creativity (imagining better worlds) and force (police violence, the exhaustive interpretive labor that bureaucracy requires from those at the bottom); neoliberalism's squashing of technological progress and social freedoms while redefining those terms so it may champion them; science fiction and fantasy and play and games. Keeps coming back to imagination and its ambiguity and potential for destruction, leaving us left or right more comfortable within layers of rules even if they harm us.

This wasn't the easiest read (I finally finished this after about three years of false starts), but once it got going for me, it really got going. A mind-changing meditation on the nature of power and authority and the real and fictional manifestations that power (the essay on futurism was a particularly fun read), the book succeeds at developing a left-wing critique of bureaucracy and the state. Strongly recommended.