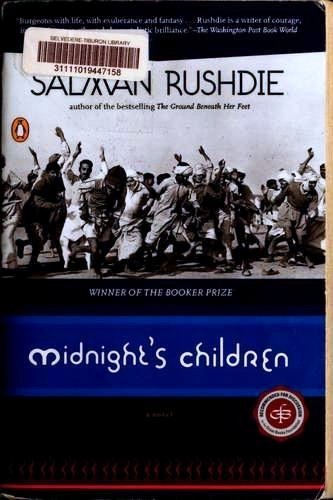 Born at the stroke of midnight on August 15, 1947, at the precise moment of India's independence, the infant Saleem Sinai is celebrated in the press and welcomed by Prime Minister Nehru himself. But this coincidence of birth has consequences Saleem is not prepared for: telepathic powers that connect him with 1,000 other "midnight's children"--all born in the initial hour of India's independence--and an uncanny sense of smell that allows him to sniff out dangers others cannot perceive. Inextricably linked to his nation, Saleem's biography is a whirlwind of disasters and triumphs that mirror the course of modern India at its most impossible and glorious.

Ebullient, operatic, comic, and serious, this novel is a wild, astonishing evocation of the maturity of a vast and complicated land and its people--a brilliant incarnation of the universal human comedy, Indian-style. (back cover)

First 50 pages are hard work, but if you do get through them and a hundred or so more, you will be awarded with a brilliant and magical, sometimes a bit frustrating read, that's definitely worth it.

Here is another I read while in graduate school. I recall it was one of the best books I read, but it was also a heavy book, with a lot to consider and study. I was interested back then in looking at the magic realist elements. I was rushing to read it, since I had other books and assignments. The paper turned out ok, but not the best I have written. I basically wished I had more time to give this book its due. This is definitely one I will have to reread at leisure someday. It is probably Rushdie's best.