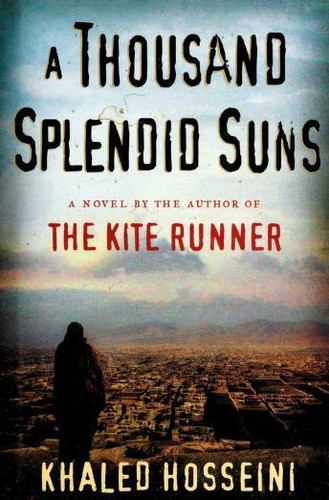 In his brilliant debut, The Kite Runner, Khaled Hosseini mesmerized us with his evocative portraits and beautiful bittersweet story. Now he returns to tumultuous Afghanistan to tell the tale of an unlikely friendship and an indestructible love...

The child of an illicit affair, Mariam was raised by her single mother on the outskirts of town. At 14, she was sent to Kabul and sold in marriage to Rasheed, a widower decades older than she. But now after twenty years and no offspring, Rasheed takes a beautiful teenager, Laila, as his second wife. While Mariam despises Laila and the baby born months after her arrival, Rasheed's cruelty and the explosive changes in the country soon draw the women together. --front flap

I read this for a book club for July 2021. This was my first time reading Khaled Hosseini after years and years—I had previously read The Kite Runner when I was probably in high school or so, and I remembered enjoying that one a great deal. Coming to this book with the perspective of an adult who knows better and has seen more things, this book did not live up to my expectations.

Hosseini said in an interview that his aim was to represent the female perspective of war-torn Afghanistan through several periods of war and occupation of the country. However, I don’t feel that he has succeeded all that much in this. Yes, we do have a narrative centered on female characters, but they are mostly stagnant until the ending and devoid of personality other than the male characters that define them. I did not find this particularly empowering …

I read this for a book club for July 2021. This was my first time reading Khaled Hosseini after years and years—I had previously read The Kite Runner when I was probably in high school or so, and I remembered enjoying that one a great deal. Coming to this book with the perspective of an adult who knows better and has seen more things, this book did not live up to my expectations.

Hosseini said in an interview that his aim was to represent the female perspective of war-torn Afghanistan through several periods of war and occupation of the country. However, I don’t feel that he has succeeded all that much in this. Yes, we do have a narrative centered on female characters, but they are mostly stagnant until the ending and devoid of personality other than the male characters that define them. I did not find this particularly empowering or hopeful, but I am also not a woman, so perhaps my inability to relate factors into this. Still, it’s strange given how even when the two main women in the story bond, they still can’t escape the specter of maleness that haunts them.

On a minor side note—why are most, except perhaps one, of the male characters in this book shit? Is Hosseini trying to make some point about men and/or Afghan men? I don’t know if Hosseini was criticized for the lack of female presence in his previous book, but if he had written a book that similarly only has terrible female characters, I am sure there would be backlash. Of course there are patriarchal injustices and crimes perpetrated by men in Afghanistan, but I would have liked to see a bit more redemption for some of our supporting and not-completely-awful male characters. It is worth reading what Lisa See said in her NY Times review: “At the same time, with the exception of Laila’s absent lover, the male characters seem either unrelentingly evil or pathetically weak. If a woman wrote these things about her male characters, she would probably be labeled a man-hater.”

Mariam and Laila also fall into the trap of being typecast characters—even the main antagonists of the book do so. Mariam is the shy, matronly figure and Laila is the so-called ‘Beauty’ who is educated and smart. Rasheed is the stereotypical evil villain who is evil for the sake of being evil. It seemed a little soap opera-ish at times. The characters can be described in brief with this quote: “These were the circumstances of her life, the inescapable truths of it.” There is little to no agency for them, understandably, but the aspects of their lives that do not revolve around men do not feature strongly, nor their inner minds beyond a few repetitive thoughts like the quote.

My main issue with this book though is how heavy-handed it is in its portrayal of cruelty and the historical situation in Afghanistan. Hosseini tries to interweave the war and historical elements into the narrative, but when your characters enter a room and have to announce that so-and-so was killed or that this regime was toppled, it’s not an appealing style—that is telling, not showing history. So, the historical narrative felt abrupt and it was hard to keep track of generals and regimes when they were so nebulous to the main narrative.

The other issue that stems from that is that the book is nothing but cruelty, torture, and misery for the characters. I’m not one who shies away from dark subject matter, but this book was obviously written with a western, non-Afghan audience in mind. At times, it seems like the book wants the reader to think to themselves, ‘Wow, I had no idea how bad things were in Afghanistan!’ And perhaps for many readers this is true. But as someone who comes from a similar cultural background, a lot of the more mundane aspects of the story were portrayed together with the most horrible without distinction, as if the reader must lump them all together. I have an uncle Rashid who has multiple wives (though they live in different houses), and domestic violence is largely excused and considered ‘normal’ in my culture. Women are told to veil and to obey their husbands without question, and many seemingly illogical aspects of religion are justified post hoc. For me, this book was just tedious.

Hosseini seems like he wanted to pack on the emotional punches, perhaps so that the western reader may put themselves in a savior position and want to try and ‘better’ this situation, or see themselves as superior… sorry, this doesn’t make much sense because I can’t articulate it well, but the whole tone of the book is like this and it put me off. There is a term for this sort of thing, ‘trauma porn’, wherein group or individual trauma is portrayed in media for the entertainment of an individual not from that group. Whether it is stories about LGBT youth who are kicked out of their homes after coming out, or ‘inspirational’ stories about people with disabilities simply living their day-to-day, narratives like these emphasize a person or group’s trauma as a kind of exhibition to an outsider. The reader may cry or feel terrible about the characters’ suffering, but at the end of the day, this is mere entertainment for such a reader. This is daily life for others.

Despite my issues, I did enjoy parts of the book, certain side characters, and Hosseini’s prose, often described as ‘lyrical’. I might say his prose can be a bit heavy-handed too at times, but it is written beautifully—and I appreciate the references to poetry and ghazals, among others. This may be a great and emotionally beautiful book for many people, but this was not the case for me. I am curious and might revisit his earlier work to see if my opinion of it has held, or if I, as an adult, would no longer be charmed by Hosseini. Either way, I commend him for putting Afghanistan on the map for a lot of westerners and attempting to humanize his country to a world that mostly saw it as an uncivilized war zone (though some things in this book seem to reinforce that stereotype…?). It certainly would not have been an easy task, so kudos. In the postscript he writes, “I hope that I will engage you, that I will transport you and that the novel will move you and leave you with some sense of compassion and empathy for Afghan women whose suffering has been matched by very few groups in recent world history.”

Any book that leaves me crying, except if it's heavy and I drop it on my toes, is a great book.

This was one of the best books that I've ever read. A friend recommended it to me during my exams. Just for the sake of checking it out, I started reading it but as soon as I completed first few pages, I was hooked. Then in the next three days, amidst all the papers, I read it from cover-to-cover.

A Thousand Splendid Suns is set in the near history of Afghanistan. The story covers the lives of Mariam and Laila, two girls with very different childhoods whose lives intersect. This story is about sadness, grief, war, and struggle, but also about keeping hope and faith. I wanted things to get better for Mariam and Laila, and was relieved when hope came through. For pain and suffering cannot last so long that peace and happiness are forgotten, and darkness cannot outlast the light.

It's been a while since I haven't bothered to finish a book. Not sure what it was about this one - maybe too similar to The Kite Runner in terms of mood, so I just wasn't captivated by the storytelling. Would generally recommend it to others, though - just not particularly thought-provoking (in the first 136 pages, at least).

Khaled Hosseini has the innate ability to send the taste of bile through your throat in an instant, depict gory acts without actually being vivid, make your heart flutter with joy and despair at will - while you still keep that small flame of hope that there is light at the end of the tunnel - and a very bright one at that. But most of all, he makes you wonder about the fate of Afghanistan and Afghanis, making you ask: 'What if?'.

Enchanting narrative. A carefully woven work laced with Farsi culture, literature and rituals in the backdrop of a troubled country. A vivid description of the wars through the experiences of the characters - even the meanest of them all.

Love. Honour. Survival. Desperation. But most of all, Hope. That is what this book is about - to me at least.

Rarely can a book make me cry. This one did. A heartbreaking story that is nevertheless full of hope, I couldn't put it down.

I picked this up from the library because everyone seems to be reading books by Mr. Hosseini. I was disappointed. There is nothing innovative about his writing, and the only thing that seems to be interesting to anyone about reading this story is that it takes place in Afghanistan. I didn't feel invested in his characters at all. They are models for Mr. Hosseini to attempt to elicit compassion and understanding in Western audiences for Afghani women--which is great, that is very noble. But they don't seem to live and breathe on their own, apart from his grand purpose. They are tragic figures that life wreaks terror after terror upon. The small empowerment that they are able to discover at the end of the novel is muted, and if anything, defeats the purpose of eliciting understanding of Afghani cultural differences from a Western audience. What, murder, or a fantasy lover?