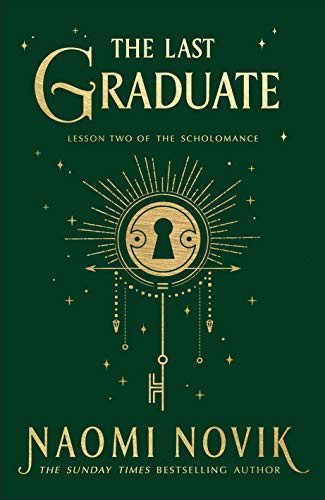 Return to the Scholomance - and face an even deadlier graduation - in the stunning sequel to the ground-breaking, Sunday Times bestselling A Deadly Education.

The dark school of magic has always done its best to devour its students, but now that El has reached her final year -- and somehow won herself a handful of allies along the way -- it's suddenly developed a very particular craving . . .

As the savagery of the school ramps up, El is determined that she will not give in; not to the mals, not to fate, and especially not to the Scholomance. But as the spectre of graduation looms -- the deadly final ritual that leaves few students alive -- if she and her allies are to make it out, El will need to realise that sometimes winning the game means throwing out all the rules.

I get absolutely absorbed into Novik's writing every new novel. If you liked A Deadly Education, you owe it to yourself to read this next installation in the series.

I did get a little tired of how much El obsesses about everything. But still great and I love the characters and the world.

I did get a little tired of how much El obsesses about everything. But still great and I love the characters and the world.

I'm too overwhelmed to say much at this stage, except that I expected exactly this cliffhanger ending all while hoping that it wasn't coming. Very Greek tragedy in that way. Can't wait for the final book.

Otherwise I'll just say again how refreshing it is to have a main character in a wizarding school story who recognises the injustices in wizard society, and then instead of just trying to restore the status quo and feeling vaguely sorry for themselves, she does something to fundamentally make things better. (Yes, that's a subtweet.)

Loved it, though reading it before the last book's release was a mistake :(.

El is my sassy queen and I swear to god I don't know how I'll make it to September on this cliff hanger.

Really well executed, and let's just say I needed some multi-culture this year, eh? A most excellent story.