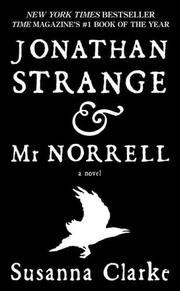 Published in 2004, it is an alternative history set in 19th-century England around the time of the Napoleonic Wars. Its premise is that magic once existed in England and has returned with two men: Gilbert Norrell and Jonathan Strange. Centred on the relationship between these two men, the novel investigates the nature of "Englishness" and the boundaries between reason and unreason, Anglo-Saxon and Anglo-Dane, and Northern and Southern English cultural tropes/stereotypes.

It has been described as a fantasy novel, an alternative history, and a historical novel. It inverts the Industrial Revolution conception of the North-South divide in England: in this book the North is romantic and magical, rather than rational and concrete.

I first read Susanna Clarke’s masterpiece when it first came out. I still have the lovingly worn hardcover US edition, with frayed edges and we’ll-thumbed pages. Considering how important ancient and lost texts are to the story, this somehow makes my copy even more authentic somehow. It is a remarkable piece of world-building as well as a literary analysis of early 19th century English Literature. Part Jane Austen, part Patrick O’Brien, and part Ann Radcliffe, this novel feels like the most thoroughly explored world that I’ve ever seen communicated in a single work.