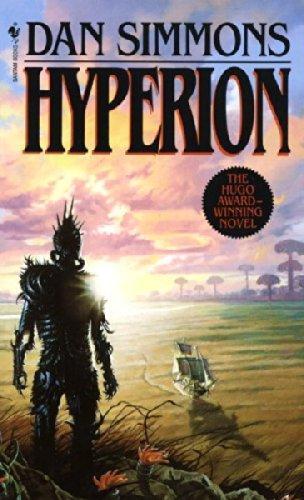 Hyperion is a 1989 science fiction novel by American author Dan Simmons. The first book of his Hyperion Cantos, it won the Hugo Award for best novel.The plot of the novel features multiple time-lines and characters. It follows a similar structure to The Canterbury Tales by Geoffrey Chaucer. The next book in the series was The Fall of Hyperion, published in 1990.

Content warning Major recapitulation of the first of the book's six interwoven tales, short phrases describing three characters, one of whom only appears late in the book, and some fruitless discussion of the novel's many connections with John Keats.

The structure, of tales told by a set of traveling companions, is purportedly inspired by Chaucer's 1387 'Canterbury Tales' (https://bookwyrm.social/book/567942/s/the-canterbury-tales), but this similarity seems superficial. Chaucer may have created a pivotal work that is known for doing it first, but it seems like a common enough device.

Once I got into the first chapters, I realized that I'd started reading this book once before, decades ago in my twenties, but had abandoned it near the start, disgusted by its lack of gritty hard-SF rigor. Coming back to it now, aged 49, that did still ruffle my feathers a little, but not so much that I couldn't plow on, and I was rewarded for it.

The intertwined tales told by each member of the group were all engaging, but they start off strong, with the horrifying initial story told by the disillusioned priest, Hoyt. This stoked my engagement, setting the emotional tone for the rest of the book. Hoyt recounts records made by one of his sect, an older priest, who discovered the Bikura, a jungle village of strangely placid and incurious idiots, regressed descendants of the occupants from a crashed spacecraft several centuries ago. The Bikura are each host to an alien organism, which grows on the walls of a nearby cave, taking the shape of a cruciform. When placed on human flesh, these quickly embed themselves, and grow internal tendrils through the whole human body. Each of the Bikura sports such a cruciform on their chest.

In addition, the Bikura worship at a spectacular cavernous Christian cathedral, hidden deeper within the caves. This construction appears to significantly predate Christ's lifetime on Earth, which the priest interprets as material proof of the objective truth of Christianity. He is elated by the discovery, and looks forward to bringing this news back to civilization.

Eventually the Bikura realize that the crucifix the priest wears around his neck is not, as they initially assumed, the same as their own cruciforms, and force one of the alien cruciforms upon him. When he comes around, it has embedded itself in his flesh.

The priest later witnesses one of the villagers resurrected from death by their cruciform, which reconstructs both body and mind. He realizes that the villagers are not descendants from the old crashed spacecraft, but are instead its original occupants, each resurrected time and again over the centuries. However, the cruciform's reconstructions are imperfect. Over the years this process has rendered them not just mentally regressed, but also sterile and in fact sexless by the process. Degenerate in body, mind and spirit.

Horrified, he attempts to remove the organism from his chest, but fails. He attempts to return to civilization, but discovers that the cruciform induces immense pain when he strays too far away. He speculates that it could be forced to retreat out of his body by sufficient pain or physical damage, and eventually crucifies himself on a "Tesla tree", a native species that induces a continual stream of lightning. There he hangs, crucified, burned and electrocuted, yet kept alive by the cruciform to endure endless agony.

After seven years the charred husk of his remains are found, by Hoyt who is relating the story. But even then, the priest was still alive. The cruciform was easily removed at this point, and upon his release, the priest briefly smiled with joy at escaping from it, before dying "the true death".

It becomes apparent that Hoyt later gained a crucifix of his own, at the hands of the villagers, and he has become desperately dependent on pain killers and medication for its management. All of which will have implications for the group that find themselves travelling with him.

In such ways, this tale bleeds into the ones that follow, from the other members of the group. They are not all quite as electrifying as this initial one, but it has already set the emotional tone, and its momentum carried me, rapt, through them all. The tales all spiral inward towards the nexus of the Shrike, a cruel and deadly creature, composed of the unlikely-looking blades depicted on the cover. The Shrike's mastery over time itself makes the creature unbeatable, inescapable, and each member of the group seems to have an appointment with it, of one sort or another.

There's probably more significance to the symbols and themes in the book, but right now I can't figure out what it is. The recurring Keats references are a prominent sign that I'm failing to understand some major aspect of it.

The name "Hyperion" is an old name for Apollo, god of the sun, distinguished for his brilliant beauty (www.webster-dictionary.net/definition/hyperion). Ill-educated heathen that I am, I had only a nebulous awareness that Hyperion is the title of a 900 line poem by Keats (https://poets.org/poem/hyperion). Reading it now, I see it depicts Saturn's mourning at being exiled from Olympus by Zeus, while the still-glorious Hyperion, discomfited that the new gods should displace his peers the venerable Titans, rages against intrusive visions which hint at his own encroaching downfall. He struggles with the phantoms of these visions, threatening to wield the mighty power of sun to bring the daytime early, and drive fear into the new Gods, but recognizes that even he cannot upset the balance of Nature so dramatically. He is driven with unaccustomed woe to withhold from the Earth the blessing of his sun, wreathed in a dismal rack of clouds. Coelus, primal god of the sky, whispers to Hyperion about her grief that he and her other sons, including Saturn her first-born, were once unruffled high gods, but are now beheld in fear, hope, and wrath, just like the mortals of the world beneath. Coelus reminds Hyperion that while she is but an ethereal presence in the world, he is an evident god, capable of acting on the world, and she urges him to do so, while she watches his sun in his absence. Hyperion gathers himself, and dives down to Earth to aid Saturn. Meanwhile Hyperion's wife Thea has lead Saturn to the deposed Titans, gathered in a glade. They talk of war, but are discouraged by Oceanus explanation although Zeus lightning and Jove's thunder were the instruments of their downfall, these events cannot be undone by mere struggle. Just as they, the Titans, had succeeded an elder world of chaos and darkness, so they were now in turn deposed by the evolution of Heaven and Earth to fairer powers than they. Wisdom lies in accepting these truths of the natural order. Her words leave Hyperion and the other Titans dejected. We then see Hyperion's successor, Apollo, seek help from the goddess of memory, Mnemosyne, with his dejection, and with his struggle to access is perception of his own latent power. Upon looking in her eyes, Apollo is overcome by an agonizing shift into a new consciousness, deifying him. He emerges from the transformation, resplendent and immortal, just as the poem abruptly ends in mid-sentence, unfinished.

What does this have to do with Dan Simmons' Hyperion? There is clearly more to it than simply a throwaway reference. Simmons named one major character after a combination of Keats' lover, and one of Keats' fictional creatures. A second major character is working on an unfinished epic poem. And eventually Keats himself, or a character bearing his inferred memories, is resurrected into the story.

I confess I cannot see the allusions that are being made here. I wish I was smart enough to be able to articulate the intended purpose of these references. Perhaps Dan Simmons just really loves Keats a lot? Does anyone else have any thoughts about this?

I'd never heard of this series or author. I think I picked it up from a Free Library so I had some skepticism. After all, a lot of science fiction is a good idea poorly written. This was a good idea well done though. Very good world building and an impressive range of styles in each story. I look forward to the next book.

At the beginning, I was worried. Shortly after that, I fell in love. This is a phenomenal read. Beautifully spun tales that keep one fully engaged and unable to put it down. Reading older sci-fi and seeing how on point it can be is always a treat. This is no exception. So glad I finally picked this up. Started a filler book, but immediately reading the rest of this series after that.